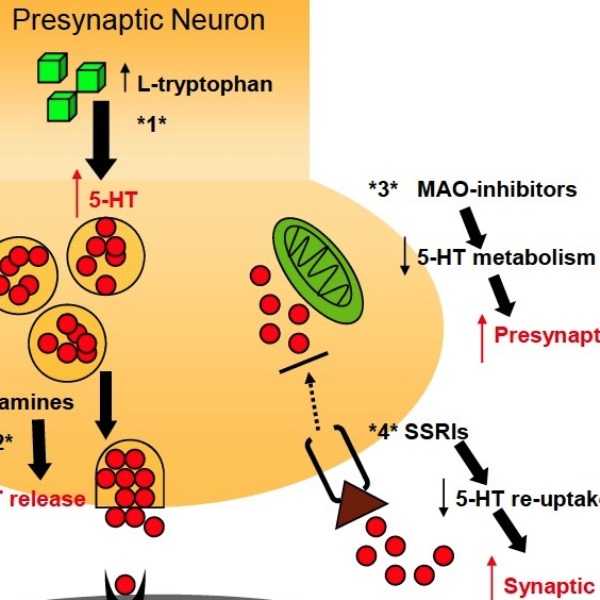 A 5-year-old spayed female 22.7kg Standard Poodle presented for evaluation due to mental alteration and abnormal breathing. The owner revealed that approximately 11 hours prior to presentation the dog had ingested a bag containing an unknown number of 5-HTP (5-hydroxytryptophan) 100mg capsules as well as marijuana brownies. The dog vomited once at home following ingestion. No previous medical history was reported, and she was not currently on any medications.

Physical examination revealed a rectal temperature of 109.5F, a heart rate of 260 beats per minute, and a respiratory rate of 70 breaths per minute. Her mucous membranes were injected and tacky with a rapid capillary refill time. Her systolic blood pressure was 100mmHg. Dehydration was estimated at 6-7 percent. The dog was non-ambulatory with motor function present in all limbs. Mydriasis was present OU and pupillary light reflexes were present and equal. Following initial evaluation, the dog had profuse projectile hematochezia.

Initial diagnostic testing included an emergency database followed by a complete blood count (CBC) and chemistry profile. The CBC was essentially unremarkable other than mild hemoconcentration. Pertinent biochemical findings are included in table 1.

Due to the known toxin ingestion, the ASPCA Animal Poison Control Center was consulted. Recommendations included treatment for suspected serotonin syndrome with cyproheptadine, chlorpromazine, and beta blockers as indicated, as well as intravenous fluid support and general monitoring for consequences of hyperthermia (such as disseminated intravascular coagulation, acute renal failure, acute respiratory distress syndrome, and cerebral edema). A guarded to poor prognosis was anticipated. Clients elected to continue treatment.

An intravenous (IV) catheter was placed and a 1.5 L bolus of Normosol-R was administered, then continued at 150 mL/hr. External cooling was provided; the rectal temperature decreased to 103.5 over approximately 30 minutes and cooling measures were discontinued. Chlorpromazine 15mg was administered IV and cyproheptadine 32mg was crushed, mixed into a slurry with water, and given rectally. The dog’s heart rate decreased to 190-200 with these interventions. The mean arterial blood pressure maintained at ~80-90mm Hg. The dog was admitted to the intensive care unit (ICU) for continued treatment.

Following transfer to ICU, a warm water enema was given for additional decontamination. Electrocardiographic (ECG) monitoring was started and revealed sinus tachycardia. Clotting times were performed and demonstrated a mildly increased PT (15 seconds, reference range 9-12 seconds) and a normal PTT (82 seconds, reference range 59-87 seconds). A recheck blood glucose measurement approximately one hour after admission was 51 g/dL and the dog was administered 20mL of 25% dextrose as a bolus and continued on 2.5% dextrose IV. As she remained tachycardic at 180 beats per minute, she was administered an additional bolus of 500mL Normosol-R IV and her heart rate improved to 140 beats per minute. She was administered ampicillin-sulbactam 500mg IV q8 hours and metronidazole 250mg IV q12 hours due to potential bacterial gastrointestinal translocation.

Approximately five hours following presentation, the dog was noted to be anisocoric with the right pupil larger than the left and no menace bilaterally. She was administered 11g mannitol IV for possible cerebral edema. Hetastarch was started at 18mL/hr IV for oncotic support given continued volume losses due to diarrhea. During the afternoon she became increasingly agitated and vocal and chlorpromazine administration was repeated. She was noted to have increased respiratory rate and effort with hypoxemia on room air (SpO2 88%), and she was started on nasal oxygen at 5L/minute with SpO2 improvement to 99%. Rectal cyproheptadine was continued q6 hours.

Over the course of the next 12 hours, the dog’s vitals remained stable, and her mentation and ability to ambulate gradually improved. She continued to have diarrhea, but ate very well when offered. Oxygen was weaned and discontinued and SpO2 remained normal on room air.  Her IV fluids were tapered due to improved hydration. Recheck bloodwork 18 hours following presentation revealed a stable PCV/TS of 44/5.4, an estimated platelet count of 105,000, and normal coagulation times. She was started on S-Adenosylmethionine and silybin-phosphatidylcholine complex for hepatosupport due to the elevated ALT and total bilirubin on initial bloodwork. No further chlorpromazine was administered. Ampicillin-sulbactam and dextrose supplementation were discontinued.

Intravenous fluids were tapered and discontinued during the day. The dog was noted to be hyperesthetic and to have urinary incontinence, and these signs were interpreted as being likely consistent with THC (marijuana) toxicity. The dog was discharged to the owner approximately 36 hours following initial presentation. Discharge medications included S-Adenosylmethionine and silybin-phosphatidylcholine complex for seven days, metronidazole for five days, and cyproheptadine as indicated for any clinical signs of serotonin syndrome. It was recommended that a recheck chemistry profile be evaluated in one week.

Serotonin (5-hydroxytryptamine or 5-HT) acts centrally as a neurotransmitter, as well as peripherally to stimulate smooth muscle, and is important in maintenance of vascular tone and gastrointestinal motility. Serotonin is formed from tryptophan, which is an amino acid that crosses the blood-brain barrier via a non-selective transporter. Once in the central nervous system, it is converted to 5-hydroxytryptophan by an enzyme called tryptophan hydroxylase, then further converted to serotonin. Serotonin is enclosed in vesicles and released at the synapse following depolarization of the presynaptic neuron. It binds to various receptors on the post-synaptic neuron and stimulates depolarization at that site, but can also bind to the pre-synaptic neuron and inhibit further serotonin release via negative feedback. Once these actions have occurred, residual serotonin is moved back into the presynaptic neuron where it is either recycled into vesicles or metabolized by an enzyme called monoamine oxidase (MAO).

Serotonin syndrome can result from the administration of certain medications, (particularly in combination or in overdose situations) that result in increased circulating serotonin levels via a variety of mechanisms (Figure 1). These mechanisms include enhancement of serotonin synthesis (L-tryptophan), increased presynaptic serotonin release (amphetamines, cocaine), inhibition of serotonin re-uptake into the presynaptic neuron (selective serotonin reuptake inhibitors, tricyclic antidepressants, dextromethorphan), inhibition of serotonin metabolism (MAO inhibitors), and direct serotonin agonism (buspirone, LSD). It is primarily overstimulation of the 5-HT1A and 5-HT2A receptors that is thought to be responsible for the clinical signs of serotonin syndrome. Because the number and type of serotonin receptors on the post-synaptic membrane vary between species and individuals, the relative risk of serotonin syndrome is not always predictable. In addition, toxic doses vary widely between different substances, and also depend on concurrent medications as well as renal and hepatic function. Serotonin syndrome in humans occurs most commonly when two or more agents with different mechanisms of action are administered concurrently or in close succession. In dogs, it is seen most commonly with inappropriate ingestion of human medications, but can also result from use of a combination of prescribed medications that have simultaneous effects on serotonin levels (see table 4). The dog in this report ingested 5-HTP, which is sold as an over-the-counter herbal supplement for treatment of conditions including depression, chronic headaches, obesity, and insomnia.

Serotonin syndrome is characterized by a combination of mental, autonomic, and neurologic signs. Diagnostic criteria have been defined in human medicine to assist in identifying serotonin syndrome and differentiating it from other disorders. While no similar criteria have been established for veterinary patients, clinical signs are similar. Dogs with serotonin syndrome typically show initial sedation, followed by agitation, disorientation, hyperactivity, vocalization, ataxia, muscle tremors, hyperesthesia, vomiting, diarrhea, tachycardia, and panting. Transient blindness can also occur. Hyperthermia is common and is due to a combination of muscle activity as well as alteration of the thermoregulatory center in the hypothalamus. In severe cases, signs can progress to seizures, coma, and respiratory arrest. Multi-organ failure secondary to severe hyperthermia is also possible. Clinical signs typically occur within 1-2 hours of ingestion, but onset may be delayed with ingestion of extended release products. Clinical signs may also vary based on the exact product ingested as well as concurrent toxicities (as in the patient presented above). Although serotonin plays a role in platelet function and coagulation, derangement of this system has not been described. Diagnosis of serotonin syndrome is made based on exposure history and compatible clinical signs. There are no classic changes expected on laboratory evaluation, which is typically consistent with dehydration, and variably demonstrates renal or hepatic insult secondary to hyperthermia and/or perfusion abnormalities.

Treatment recommendations include decontamination (emesis induction only in asymptomatic patients with recent ingestions), activated charcoal administration, diazepam or phenothiazines for agitation, external cooling if indicated, intravenous fluids for rehydration and cardiovascular support, and symptomatic therapy as indicated for vomiting, abdominal pain, or other signs. Cyproheptadine (1.1mg/kg q4-6 hours) is a nonselective serotonin antagonist and can be absorbed rectally if oral administration is not feasible due to protracted emesis or concurrent administration of activated charcoal. In addition to treating agitation and nausea, chlorpromazine (0.5mg/kg IM, IV) is also a 5-HT2 receptor antagonist. Propranolol may be indicated for significant tachycardia not responding to other measures, and is also a 5-HT1A receptor antagonist. In severely affected patients with respiratory depression or coma, intubation and mechanical ventilation may be required. Prognosis can be good for patients that have mild signs and/or are treated early. It is anticipated that signs will resolve within 12-24 hours with full recovery typically within 48 hours. More serious complications can include rhabdomyolysis, disseminated intravascular coagulation, and renal failure. Severe hyperthermia can also worsen the prognosis.

With the increasing use in veterinary medicine of multiple medications that can alter serotonin levels, as well as the common availability of serotonergic human medications and drugs of abuse, it is important to remember the risk factors for serotonin syndrome and to be able to rapidly recognize the clinical signs. Cyproheptadine is one of the cornerstones of treatment, is typically readily available, and can be administered rectally if the oral route is not an option. Early intervention and aggressive treatment can result in a good prognosis for recovery.

How do you know the chocolate in the brownies wasn't adding to the clinical signs?

Good question! Actually, some of the clinical signs in this patient could certainly have been attributable to either serotonin syndrome or chocolate toxicity, but certain features (including the extreme hyperthermia and altered neurologic status) are far more likely to be associated with serotonin syndrome. In addition, it would be unlikely for a patient of this size to develop life-threatening signs of chocolate toxicity due to ingestion of baked goods, which don't typically contain highly concentrated amounts of methylxanines. In contrast, the 5-HTP capsules are quite concentrated; while the owners did not know how many this dog ingested, it would only have taken ~6 capsules to cause signs of toxicity and ~30 capsules to reach a lethal dose.