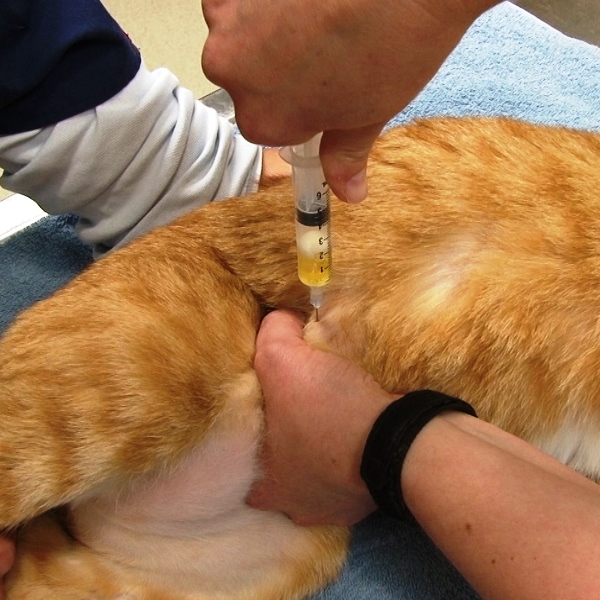 The most common composition of canine and feline uroliths is struvite and calcium oxalate, accounting for about 80 percent of all submissions to the University of Minnesota Urolith Center. This article will focus on two of the lesser common urolith compositions: urate and cystine.

Urate-containing uroliths are the third most common urolith in dogs and cats. They comprise about eight percent of submissions for dogs and about five percent for cats.

Formation of urate uroliths occurs from urine supersaturation with purine metabolites. Sources of purines include diet and endogenous cell turnover. Uric acid is an intermediate product of purine metabolism and is typically converted within hepatocytes to allantoin, which is much more soluble in urine than uric acid (Figure 1). Hyperuricosuria, concentrated urine, and acidic urine are the predominant factors leading to urate urolith formation.

Two diseases are associated with urate urolithiasis in dogs: 1) a genetic defect of the uric acid transporter, and 2) portosystemic vascular anomalies. The commonality between the two is inefficient transport of serum uric acid into the hepatocytes where uric acid is degraded into allantoin.

Dalmatians, English bulldog, black Russian terriers, and Australian shepherds are all breeds at risk for genetic hyperuricosuria. Males are affected much more commonly than females. They are most commonly diagnosed in younger dogs (3-4 years old on average), with a decrease in incidence after 6 years of age.

Urate uroliths are relatively radiolucent therefore they may not be seen on survey radiographs. Ultrasonography or contrast radiography may be needed to detect them. They are usually small (1-15 mm), smooth, round or oval, and light yellow, light brown or light green in appearance (Figure 4).

Urate urolithiasis in dogs without a known genetic predisposition should prompt an investigation into underlying liver dysfunction. Genetic testing is available to confirm the uric acid transporter defect at the University of California, Davis (www.vgl.ucdavis.edu/index.php).

Medical dissolution should be considered for non-obstructive urate cystoliths that are not associated with liver disease unless medications or dissolution food cannot be administered or tolerated.

Medical dissolution in dogs involves both dietary and drug components. In dogs, urate uroliths can be medically dissolved either completely or partially in the majority of cases when an appropriate calculolytic diet is given. The diet should be canned and contain lower purine/protein, ideally formulated with egg, dairy or vegetable proteins, that results in a more neutral or alkaline urine pH. The calculolytic diet of choice for dogs is canned Hill’s Prescription Diet u/d.

Dissolution of urate uroliths in dogs is usually is accomplished within four weeks when feeding u/d diet and administration of allopurinol. Without allopurinol, dissolution averages about three to four months with a calculolytic diet alone.

In cats, there is no data for the dissolution of urate uroliths. Dissolution has been reported in a few cats using a combination of Hill’s Prescription Diet k/d and allopurinol (15 mg/kg q 12-24hr).

Since protocols designed to consistently dissolve ammonium urate uroliths in cats have not yet been developed, minimally invasive procedures or surgery remain the most reliable methods to remove active uroliths from the urinary tract. Urate uroliths associated with portosystemic shunts cannot be medically dissolved.

Prevention is important due to the high recurrence rate. The keys to minimize recurrence are to decrease urine concentration, promote alkaline urine (> 7.0) and limit purine intake. The optimum urine specific gravity to target is ≤ 1.020 in dogs and < 1.030 in cats. This is best achieved by feeding a canned-only diet. However, if the patient refuses, adding water to dry kibble can also increase water intake.

XOIs should be considered in dogs with genetic hyperuricosuria that have failed therapeutic diet prevention. The recommended dosage to safely prevent urate urolithiasis while trying to prevent xanthine urolithiasis is 5-7 mg/kg q 12-24. XOIs should not be administered to dogs that are not concurrently being fed a purine restricted diet as this will increase the risk of xanthine urolith formation.

In most cats, the cause for hyperurisocuaria and urate urolith formation remains idiopathic; however, purine restriction and urine alkalinization are recommended and found to be effective in these patients. Urine alkalinization with potassium citrate (75 mg/kg q 12) should be considered if the urine pH is consistently < 7.0.

In cat and dogs with portosystemic vascular anomalies, surgical correction should be considered, if appropriate for the patient.

A urinalysis should be monitored every three to six months to adjust pH to ≥ 7, and urine specific gravity to ≤ 1.020. Medical imaging is recommended every six months as well to detect recurrent stones when they ideally would still be small enough for minimally invasive removal.

Cystine uroliths form, in part, due to a defect in the proximal renal tubule leading to decreased reabsorption of cystine and subsequent increase in urine cystine levels. Cystine is relatively insoluble in urine and cystine crystals precipitate in acidic urine to form uroliths.

A urine nitroprusside test is an effective screening test for cystinuria. A genetic test for Newfoundlands and Labrador retrievers is available as well. Both of these tests are available at the University of Pennsylvania (research.vet.upenn.edu/penngen).

Commonly affected breeds are the mastiff, dachshund, Welsh corgi, Chihuahua, English bulldog, Irish terrier, Newfoundland, bull mastiff, basset hound, and Scottish deerhound. The mean age of affected dogs is 4-6 years old. Males are almost exclusively affected (98 percent) compared to females (2 percent). The exception is in Newfoundlands, as they develop uroliths at a younger age (under 1 year) in both males and females.

Domestic shorthair and Siamese breeds are the most affected cat breeds. There is no sex predisposition.

Cystine urolithiasis is a result of an inborn error of metabolism involving defective renal tubular reabsorption of certain amino acids including cystine. Renal function otherwise appears to be unaffected. Aside from a tendency to form uroliths, the defect is without medical consequence. Castration is recommended in these patients to prevent genetic transmission.

Cystine crystals are flat, colorless and hexagonal in shape (Figure 5). They are always considered abnormal when found in urine.

Cystine uroliths are relatively radiolucent therefore they may not be seen on survey radiographs. Ultrasonography or contrast radiography may be needed to detect them. They are small, spherical, and light yellow, light brown, or light green (Figure 6).

In dogs, medical dissolution of non-obstructive cystine cystoliths should be considered before removal, unless medications or dissolution foods cannot be administered or tolerated. Medical dissolution involves both dietary and drug components. Dogs should be fed a protein restricted, urine-alkalinizing, canned diet such as Hill’s Prescription Diet u/d.

Thiol disulfide exchange medications, such as 2-mercaptopropioyglycine (2-MPG, Thiola), are also used at a dose of 15-20 mg/kg PO q 12. This increases the solubility of cystine by binding to the precursors of cystine.

In addition, cystine solubility increases with an increasing urine pH. If dietary therapy alone is not sufficient to maintain urine pH of approximately 7.5, a urine alkalinizer such as potassium citrate (75 mg/kg PIO q 12) should be administered.

Prevention:
Prevention is important due to the high recurrence rate. The keys to minimize recurrence are to decrease urine concentration, limit animal protein intake, increase urine pH and neuter patients. The optimum urine specific gravity to target is ≤ 1.020 in dogs and <1.030 in cats. This is best achieved by feeding a canned-only diet. However, if the patient refuses, adding water to dry kibble can also increase water intake.

Dietary considerations are similar to those recommended for medical dissolution; however selecting an effective long-term commercially prepared food may be difficult as the degree of protein restriction needed is controversial due to the potential for carnitine deficiency. Carnitine deficiency and associated dilated cardiomyopathy were reported in five cystinuric dogs fed low protein diets.

As thiol-binding drugs are not benign, they should be reserved for prevention of stones in patient with recurrent disease that is not adequately controlled by the strategies outlined above.

A urinalysis should be monitored every three to six months to adjust pH to 7 to 8.0, and urine specific gravity ≤ 1.020. Medical imaging is recommended every six months as well to detect recurrent stones when they ideally would still be small enough for minimally invasive removal.